As football season is closing in, the Bears are dealing with lots of change. One thing that is not being changed, however, is their very experienced Linebacker core. All four of the linebackers are three-year starting seniors. Logan Cox (24), Mikiah Jenkins (13), Kaleb Moore (25), and Reid Shaw (11) have built significant amounts of chemistry over the years. 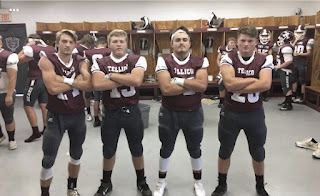 When asked what's special about this group, Logan Cox answered, "The special thing is that our linebacker group has been playing football with each other since we joined little league. We're like family."

Mikiah Jenkins added, "The advantage is our chemistry together. We know we have each other's back no matter what. It makes us flow better together on the football field."

When asked what he will miss the most, Kaleb Moore stated, "being called The Four Horsemen, and hanging with all the boys like we did in little league. Getting hype over blitz calls in practice, and me and Kev running to the wrong side after getting the strong calls wrong."

Head coach Jon Rechtorovic had this to say about his senior linebackers. "They are all hard-nosed competitors, resilient, and very intense hard workers. They focus on details and are very coachable leaders."
These senior linebackers are hoping to lead Tellico to the playoffs for a third straight season, something that has never been done before in program history. When asked how it would feel to be the first team to accomplish this, Logan Cox responded, "It would mean the world to me, something I would never forget and I would not want to be there with any other team."

This Tellico Plains linebacker group is a very special group of players. Only time will tell how their senior season will pan out.